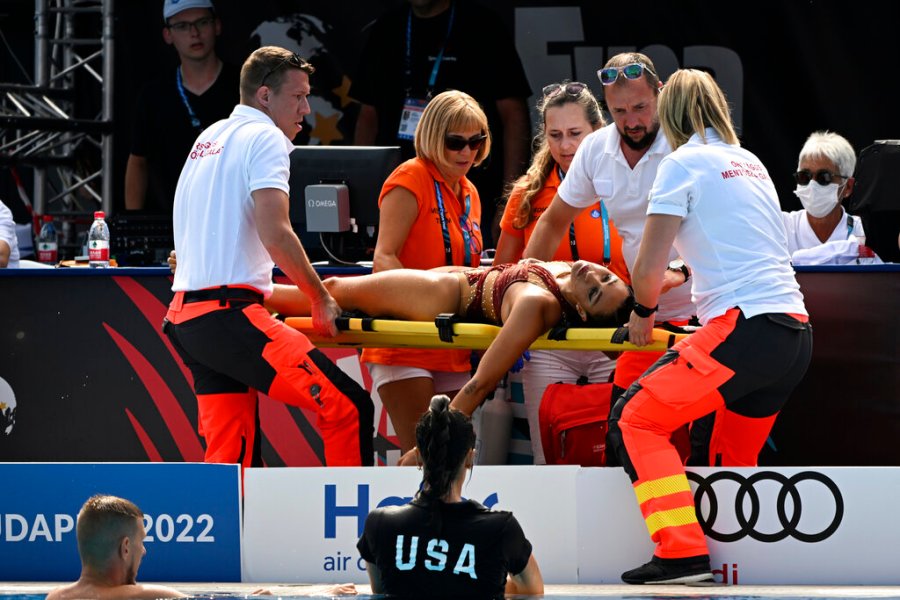 (WIVB) – Anita Alvarez, a two-time Olympian from New York, had a scare Wednesday when she passed out in the pool during the FINA World Championships in Budapest, Hungary. But her coach said on social media that Alvarez is doing fine, and she has been cleared by doctors.

Alvarez passed out at the end of her solo routine in artistic swimming, formerly known as synchronized swimming. Andrea Fuentes, Alvarez’s coach, jumped in to rescue Alvarez from the bottom of the pool, lifting her to the surface. Another person helped Fuentes lift the swimmer out of the water, before she was placed on a stretcher.

“Anita’s solo was so good too, it was her best performance ever, she just pushed them through her limits and she found,” Fuentes later wrote on Instagram. “But Anita is OK and the doctors also said she is fine.

“We all know it happens in other sports: cycling, marathon, track and field … some don’t make it to the final line and some even finish crawling or passing out,” Fuentes added. “Our sport is very hard too. Now it’s time to rest and recover. Tomorrow is highlight day and free duet finals! Ready to give our best.”

Alvarez had previously passed out in the pool during an Olympic qualifying event in 2021. When discussing the 2021 incident with Nexstar’s WIVB, Alvarez claimed she felt like she was merely falling asleep.

“I honestly thought I was asleep,” Alvarez told WIVB after the qualifier. “I started hearing people saying, ‘It’s going to be OK.’ I thought, ‘Stop telling me that! I’m trying to sleep.’ Then I realized that no, I was still in the pool.”

“Unfortunately, I’ve seen it happen to her before,” Alvarez’s mother said last year. “Never in competition, though. I knew right away. On their last element, I could tell something was up.”

In 2021, Fuentes had also dived into the pool, fully clothed, to rescue Alvarez. “I felt more tired than usual, but I didn’t think I was going to pass out,” Alvarez remembered of the 2021 incident. “On that last arm, I’m like 45 degrees horizontal when I’m supposed to be vertical. I remember doing it and thinking I was vertical. Then the feeling kept spinning, like I was in a hamster wheel. I don’t remember anything until I got to the wall. They had already carried to me to the wall and I kind of woke up out of it and realized my coach was in the pool, and that was that.”

Alvarez attributed last year’s incident to exhaustion, as she was competing in several events in a short span. This time, she was coming back after foot surgery, posting a photo with crutches as recently as five weeks ago.

Alvarez previously told WIVB she’s hoping to compete in the 2024 Olympics in Paris. For now, though, Team USA has not confirmed whether Alvarez plans to compete in the final later this week. “Whether or not she will swim in the free team final on Friday … will be determined by Anita and expert medical staff,” USA Artistic Swimming said in a statement to the Associated Press.